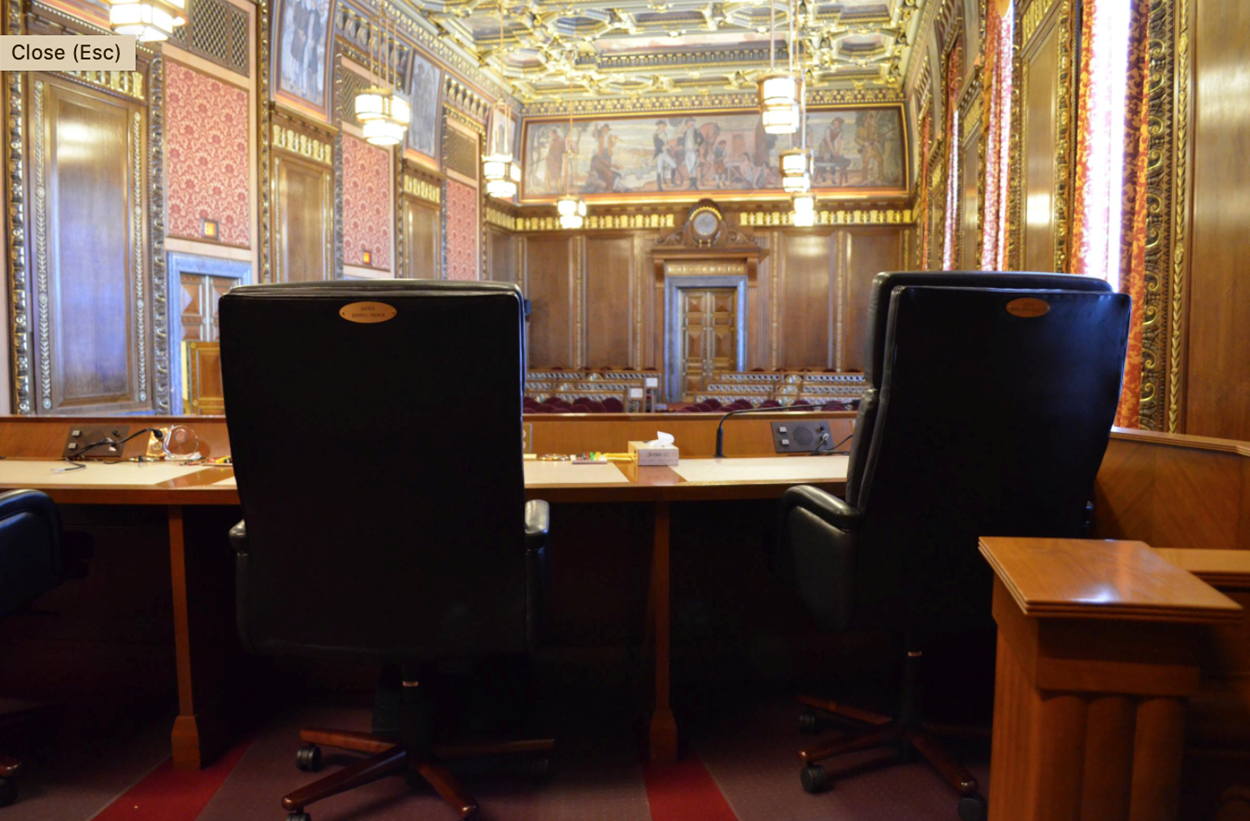 The view from the bench at the Ohio Supreme Court

Way down at the bottom of the Ohio ballot are two important races – two seats on the Ohio Supreme Court. These are non-partisan races on the ballot, but there are differences between the Republican incumbents and their Democratic challengers.

The two met for a virtual forum to discuss their views on issues such as their role on the judiciary.

“I believe that our role as judges is to serve as independent bodies, to interpret the law as it's written, not rewrite it or legislate from the bench does not mean that we abdicate our role to the General Assembly," said Kennedy.

“I see the role of a judge as following the facts and the law where it leads, guided by the Constitution and by conviction, and by political courage," said O'Donnell.

Also in this forum, organized by the Ohio Debate Commission, were the candidates in the other race: Republican Justice Judi French, first appointed to the court in 2012 from the 10th District Court of Appeals, and current Tenth District Court of Appeals Judge Jennifer Brunner, a Democrat and the only woman to ever serve as Ohio’s secretary of state.

“My job is as a judge is to be an umpire, to call balls and strikes. It's not to bring my own personal biases into the cases in front of us. And that is that there are times when I may not like the result at all," French said.

“Those who are officers of the court are really problem solvers. We help people. And that is the crux of our profession. We're specially trained to understand what rule of law means and to help interpret it and help people use it to solve their problems peaceably," said Brunner.

The candidates couldn't talk about any case that's before the Court or could come before the Court in the future. But they could talk about overall views on the role of the judiciary and on its relationship to other branches of government. And they did discuss judicial restraint and activism.

On the four Supreme Court rulings that the state’s way of funding public schools is unconstitutional, Kennedy said it’s up to the legislature to rewrite that law, while O’Donnell said other states have found ways to make lawmakers do that. On the different fees and sentences across municipal courts, French said the Supreme Court doesn’t have authority over them but should know what’s happening, while Brunner said the justices do have responsibility through the rules that govern courts in Ohio.

The candidates also were asked about ethics and issues related to campaigning for these seats on the Court. There's no indication on the ballot what party the candidates are aligned with, but the parties make it clear that French and Kennedy are Republicans and Brunner and O'Donnell are Democrats.

Democrats Brunner and O’Donnell have not signed the Ohio State Bar Association’s clean campaign pledge. That’s an agreement where they promise to take personal responsibility for ads their committees put out, but also to disavow ads from other sources that suggest how they or their opponents might rule on future cases or erode trust in the judicial system. The OSBA has said only one other candidate has not signed the pledge in the last ten years.

O’Donnell said he doesn’t believe he has to worry about outside advertising.

“I will exercise my own judgment and denounce, if I see fit, some third party advertising that might hypothetically appear. So I'm not going to abdicate my own personal judgment when I'm running because I believe I have good judgment," O'Donnell said.

Brunner said she’ll rely on her judgment too.

“I will certainly call out ads that are objectionable. And I certainly have great respect for the members of the committee of the Bar Association. But I have pledged to be fiercely independent, and I think that's what the voters of Ohio want," Brunner said.

The Republican incumbents have taken criticism for speaking at partisan events – specifically Kennedy, who spoke at a Greater Toledo Right to Life event in 2017 before hearing a case against a Toledo abortion clinic. A few months later, Kennedy joined the majority in ruling the clinic had to stop performing abortions.

But Kennedy said this and other partisan appearances are appropriate.

“To speak at a partisan event does not mean that I'm speaking on behalf of a party platform. Now, when I speak in those groups, I talk about the tripartite system of government and why the third branch, why the role of the judiciary is important in the republic," said Kennedy.

Critics have claimed the Republican-dominated court is overly friendly to business. And in her agreement that speaking to partisan groups is appropriate, French also praised the support she and Kennedy have received from a group run by Republican former Congressman Pat Tiberi.

“And as for the Business Roundtable and the CEOs that are encouraging their employees to vote for me, I applaud that effort. I believe that that is correct is a correct statement that having me remain on the Ohio Supreme Court is better for the stability of the court. It's better for consistency and predictability," said French.

One thing that the candidates all seem to agree on – the importance of money. All four have each raised more than a half a million dollars this year.

In their last races in 2014, Kennedy got nearly three quarters of the vote, while French beat O’Donnell by more than 10 points.

But if Brunner and O’Donnell both unseat the incumbents, it would be the first time since 1993 that there would be Democratic majority on the Ohio Supreme Court. For part of that year, there were four Democratic justices: Herbert Brown, Alice Robie Resnick, Francis Sweeney and William Sweeney.