Justice Jennifer Brunner urged local support for the development of a statewide database of felony criminal sentencing in Ohio.

“I believe Ohio’s judges strive to do good.  But we need more than anecdotal examples, personal beliefs or individual experiences to prove that.  If we find deficiencies, the data informs us so that we can address and correct them.  The data gives us the best information for creating effective rehabilitation for safer communities and humane outcomes,” said Justice Brunner, who is running for Chief Justice in the November 2022 election.

Justice Brunner is a former trial and appellate judge and a longtime supporter of the database, which she emphasized as a central plank of her policy platform for Chief Justice.  She also supported it in her 2020 campaign for the Ohio Supreme Court.

“The full implementation of this database will be a priority of my administration because it is foundational support for transparency in sentencing in Ohio and is expected to aid in identifying and eliminating systemic racism and other injustices that were identified in 1999 to exist in Ohio’s criminal justice system.  It also helps the Supreme Court learn where more resources can be targeted for the benefit of overburdened courts, probation departments, prosecutor’s offices and public defender’s offices--all to the good of Ohioans and their communities throughout the state.”

Justice Brunner pointed out the human concerns with the database, recognizing the state’s great diversity.  “Ohio’s criminal courts should be a model of how Ohioans treat other Ohioans--with fairness, equality and respect.  A database is the beginning of that realization.  We are a diverse state, and success will come when the best traits of Ohioans shine through and we fearlessly examine and face where we have done well and where we can do better.  Our diversity is our strength, and this bringing together of how we sentence our fellow citizens in criminal proceedings will help us do right by Ohioans,” said Brunner.

Currently, Ohio does not have a central repository for standardized felony sentencing data that includes information about specific crimes, sentence lengths, criminal history and demographic information about defendants. This type of database has been under discussion for more than 20 years. In 1999, the late Chief Justice Thomas Moyer appointed the Ohio Commission on Racial Fairness, which found that the well-documented racial disparities in criminal sentencing required further study and data to address. An implementation task force in 2002 recommended the adoption of a statewide system for “the systematic collection of this data.”

The murder of George Floyd and the nationwide reckoning on racial justice in recent years have given renewed urgency to the project.

Progress is being made under the current leadership of Chief Justice Maureen O’Connor. In June 2021, the Ohio Criminal Sentencing Commission unveiled a new website to help courts implement a uniform sentencing entry system that will be called the Ohio Sentencing Data Platform, or OSDP. This is an important step toward the development of an ongoing statewide criminal sentencing database.

As a threshold step for the new statewide criminal sentencing database, the state’s high court is implementing a uniform sentencing entry that will facilitate standardized collection of uniform types of data for felony sentencing in eventually all of Ohio’s 88 counties in order to provide accessible and searchable information that can help judges in making their sentencing decisions.

Chief Justice Maureen O’Connor on October 4, 2021 hosted a signing ceremony for an $800,000 agreement with the University of Cincinnati for the school to build the database infrastructure. 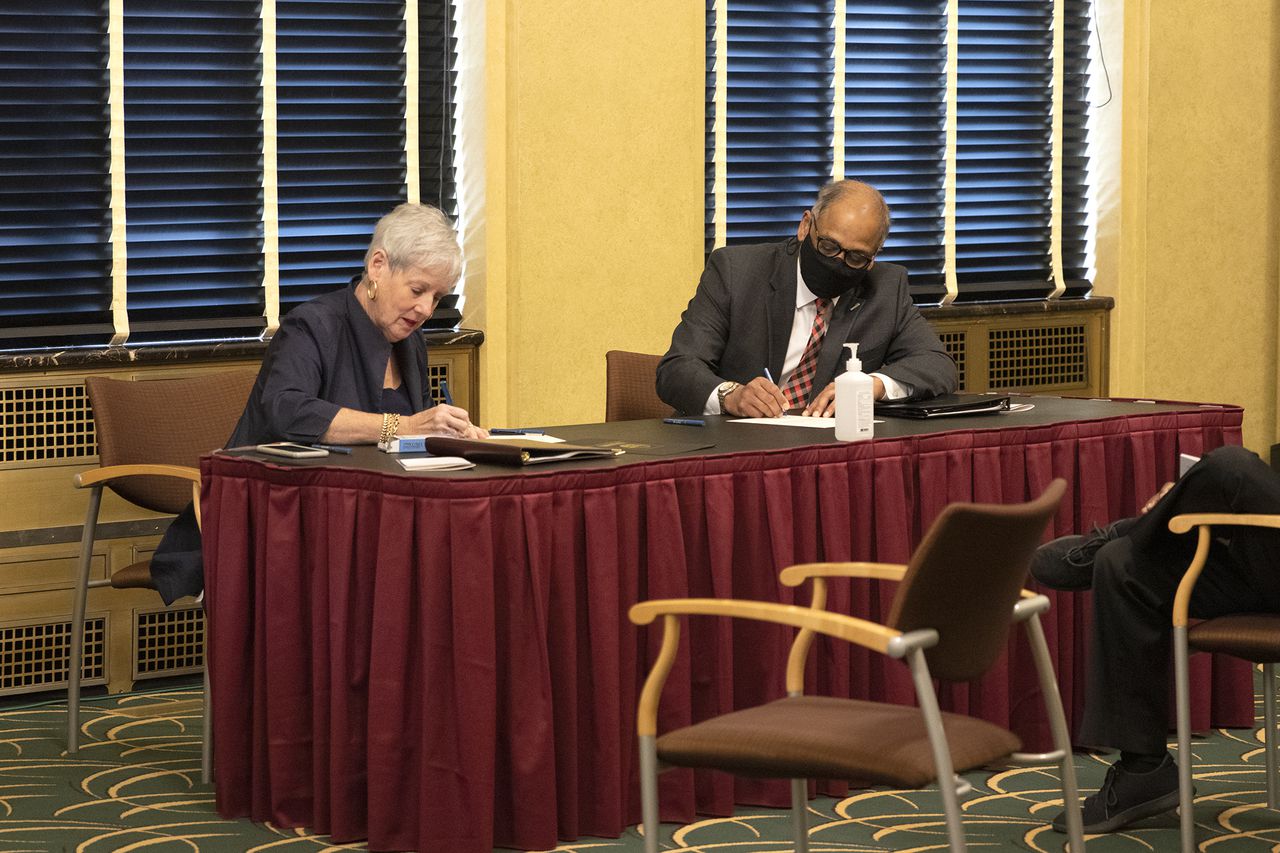 Twenty of the 36 judges on the Cuyahoga Court of Common Pleas have agreed to participate in the program.  A recent grant from the Cleveland Foundation is assisting the Ohio Criminal Sentencing Commission with the work in Cuyahoga County. There are 244 common pleas judges in Ohio, and as of May 2022, about 88 judges from 42 counties are engaged in some facet of the project.

The Ohio Judicial Conference, which represents Ohio’s 723 elected judges, has not taken a position on the database. Its executive director told the Columbus Dispatch in June 2021: "It's in the baby stages at this point so judges have essentially been very quiet about it at this point. I'd say they're in a wait-and-see mode."

Brunner expressed gratitude for the active engagement of judges already supportive of and involved in the effort. She plans to continue her advocacy for the database, as Justice O’Connor did in her 2021 State of the Judiciary Address delivered at the annual meeting of the Ohio State Bar Association.

“For the public to be informed — and for truth to win out over rumor and fiction — the public must be able to see equal justice for all and understand how it is measured,” Justice Brunner said. “This database will a valuable tool to measure and create greater fairness and objectivity so that we can better do our work--all to the benefit of public confidence in what we do,” said Brunner.

Three other Ohio appellate judges, including a Supreme Court justice, recently came together to defend the database in a national journal.

“We can’t afford to pretend that the problem doesn’t exist,” they wrote. “Justice requires that judges get it ‘right.’  Why prevent useful, relevant, and important information from being considered by trial judges in achieving this goal? Once the criminal sentencing database is in place, for the first time in the state’s history all stakeholders, including judges, will have access to relevant information that can inform their sentencing decisions while keeping biases, implicit or otherwise, in check. This will usher in a fairer, more transparent system that we should all support.”

The three jurists are members of the task force launched by Chief Justice O’Connor to develop the database.

Other judges have weighed in positively.

“I feel like a pioneer blazing through a forest,” Allen County Common Pleas Court Judge Jeffrey Reed told the Columbus Dispatch. Judge Reed is among judges now trying out the new data tool.

Lawrence County Common Pleas Court Judge Andrew Ballard, another of those using the tool, told the Dispatch: “This is an opportunity to make me a better judge.”

Franklin County Common Pleas Court Judge Jaiza Page told the Dispatch that after using the tool for several weeks, it has caused her to think through the various applicable sentencing factors.

Justice Brunner holds unique experience in creating and overseeing the development of a statewide database. While serving as Ohio’s 52nd and first female Secretary of State, she fulfilled a campaign promise to develop a social health index of quality of life factors for Ohioans.  Ohio was one of the few states in the nation to have a social health index during her state service.  Called “Better Lives, Better Ohio,” this database was a searchable tool on the Secretary of State’s website that provided information ranging from details about incarcerated youth, to the use of libraries by Ohioans, to geologic formations in the state, to Medicaid and local school information and more.  The database was used by students, academics, reporters and citizens and ultimately became the basis for creating a Scorecard for Ohio to be used as a benchmark for testing the effects of policy in Ohio for the future.

Justice Brunner said continuing the work of the task force is critical to public confidence in the state’s judiciary and how it administers criminal justice.  She called on every judge to learn about the database and help support its success.

“This starts with judicial advocacy for the betterment of the state’s judiciary. Judges can and should use their standing as community leaders to explain the vital need for this important tool.”  Brunner applauded those judges who are currently actively participating in the process of standardizing the way data is collected, which she described as “for the benefit of accurate and consistent data to ensure fairness throughout the state.”